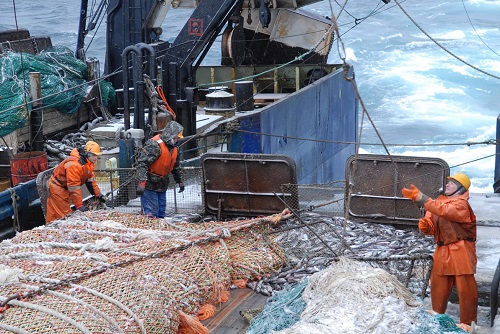 Russian seafood companies are investing in apprenticeship and internship programs in response to facing a shortage of trained workers.

That deficit that stands to increase as the Russian government continues its renovation program for the country's seafood industry.

Russian fishing companies have been experiencing a lack of skilled workers for years. The deficit is across all levels of the profession, from deckhands to captains. The worker shortage issue doesn’t appear to be due to a lack of pay. According to a survey by media agency RIA Novosti, published early in 2022, those employed in the fishing industry enjoy one of the highest average income rates in Russia. While the highest-paid workers in the country were financial specialists in Moscow, fishermen from Murmansk ranked second with a monthly salary of RUB 193,000 (USD 3,198, EUR 3,100) on average, followed by fishermen from Magadan, in Russia’s Far East, with an average monthly salary of RUB 169,000 (USD 2,800, EUR 2,700). Fourth in the rankings were fishermen in Petropavlovsk-Kamchatskiy, also in Russia’s Far East, who earn an average monthly salary of RUB 135,000 (USD 2,236, EUR 2,154). The average salary in Russia in 2022 is just RUB 62,270 (USD 1,031, EUR 993), the Russian Federal Agency for Statistics said.

The Russian government estimates there are around 120,000 workers in the country's seafood industry, and fishing ranked as one of the highest-paying industries in Russia in both 2019 and 2020, even though the depths of the Covid-19 pandemic.

The All-Russian Association of Fishing Industry (VARPE) said over the last eight years, the average salary of fishing company employees has increased 100 percent.

Despite the high pay, VARPE said – in a response to a request from the Russian Ministry of Agriculture –  that fishing companies are suffering from a lack of specialists in ship navigation, ship engineering, electrical equipment operations, refrigeration and food equipment management, and trawling equipment maintenance.

Oleg Stcheka, the director of Vladivostok-based Far Eastern Technical Fishery University, said that the average graduate from the school receives four or five job offers from fishing companies eager to backill needed positions. However, according to the Fishery Shipowners Association (FSA), only 15 percent of graduates of academies designed to educate young Russians in skills necessary for the industry actually pursue careers in fishing.

FSA President Alexey Osintsev said Russia's second investment-quota program, which the Russian government hopes to launch in 2023, will create additional 14,000 jobs in the seafood sector. With the program's focus on upgrading the Russian fleet with state-of-art fishing and processing equipment – reflecting the country’s desire to produce more deeply-processed products – the industry's demand for skilled labor is likely to increase.

However, younger Russians aren't eager to join the industry due to its reputation for harsh and exposure to danger.

Russia's seafood companies have responded with a campaign to improve perceptions among Russia's college-aged population. All of Russia's major fishing companies now have accounts on the most-popular Russian social media sites, where they publish job vacancies and promote their working environments as friendly and comfortable. When Russian Fishery Company (RFC) recently sent one of its supertrawler new-builds through the Northern Sea Route recently, it actively covered the ship’s passage through its social media – with a special emphasis on the improved working conditions for staff compared to older vessels.

Another group of companies under Antey is in talks with authorities in the Murmansk region to invest in the Murmansk Fishery College. The company said it is ready to help finance the renovation of the school to enhance student skills necessary for a career in fishing, with the goal of supply more workers to the industry.

In Vladivostok, Antey also regularly organizes tours of its ships for students at the local Marine State University, where students are told about internship and employment opportunities.

RFC has also focused on education at MSU. RFC CEO Olga Naumova said in a corporate press release the company working to create stable and comfortable working conditions for its employees.

“Communication with the students is of top priority for us. Those who perform the best today can become part of the company tomorrow,” she said.

And some Russian fishing companies are aiming even younger than the university-level. Russian Crab has also teamed up with MSU to organize a career guidance event for at least a dozen secondary school students in the Primorye region. The university is promoting its education programs, while the company is promoting possible career paths in the fishing industry.

“The first investment-quota program has a big impact on the seafood industry, with new ships being floated out and new professional horizons emerging,”  Russian Crab Human Resource Director Natalya Savchenko said. “We want school students to be aware of the industry and the opportunities it offers.”

Russian Crab also conducts career days at MSU to recruit younger talent, and launched an extensive internship program for students and graduates of high schools in the Far East.

Norebo, the Murmansk-based group of companies that is Russia's largest fishing conglomerate, has sponsored the construction of a school in its hometown specially designed for gifted children, with a wider and more difficult curriculum than a typical secondary school. Norebo said it funded the creation of “marine classes,” where students in fifth grade – Russia’s school system has 11 grades – get an introduction to fishery-related trades, while 10th grade students are introduced to fishing and fish-processing related professions.

“We want to get students prepared for their first sea expedition, so that they get onboard not just with an understanding of a profession, but with a solid skillset,” Norebo Representative Vladimir Grigoriev said in a company press release.