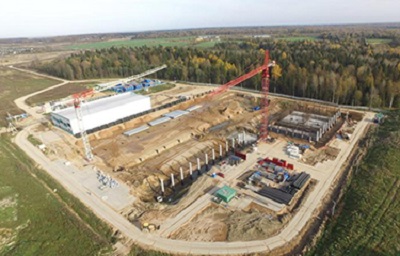 Akvaproduct, a salmon farm based in Russia’s Vologda region, is planning to launch operations at its recirculating aquaculture system (RAS) salmon smolt-rearing unit in late January. The hatchery and grow-out facility have been built to supply a nearby salmon RAS farm currently being built by the company.

According to the region’s government, which subsidized part of the hatchery and the farm, construction on the facilities began in 2019. The hatchery will be the first of its kind in Russia –  which currently imports the vast majority of the Atlantic salmon it consumes.

The hatchery is almost finished, with final inspections by veterinary authorities being conducted prior to the importation of the first batch of Atlantic salmon eggs. Akvaproduct plans to complete construction of its salmon RAS farm as the eggs are being hatched and raised. The company projects the output of the farm will be 2,500 metric tons (MT) of Atlantic salmon each year. Akvaproduct has invested over RUB 2 billion (USD 27.4 million, EUR 25.9 million) in the project. Akvaproduct has hired Israel-based RAS specialist AquaMaof to build the farm, according to InvestForesight.com.

Vertically-integrated farming structures are becoming a trend in Russian aquaculture. In October 2022, Inarctica, formerly known as the Russian Aquaculture company, bought Kaluga, Russia-based The Selection Aquaculture Center, which specializes in hatching char smolts through RAS technology using eggs imported from Europe. Prior to that, Inarctica purchased a Kaluga-based farm called F-Trout, which has an annual output of 500 MT.

The expansion of commercial salmon farming in Russia has come in response to growing demand. According to a recent survey by consultancy Gradus, published by retail.ru, sales of salmonids in Russia increased in 2022 by 2 to 3 percent compared to 2021, despite a poor domestic wild salmon season. The Gradus study found retail chains have increased the number of salmonid products available to customers at retail, helping drive consumer interest.

The share of chilled salmonid sales in Russia's retail seafood segment grew from 15.46 percent during the first eight months of 2021 to 28.28 percent in the same period of 2022. Given the lower number of wild-caught sources, it shows consumers have increased their consumption of farmed products.

Atlantic salmon sales held a 2.15 percent share in whole salmonid volume purchased at retail from January through August, up from 0.66 percent a year ago. The increase came despite a drop in imports. Disruptions in the supply chain drove salmon prices up, but wealthy Russian consumers who can afford farmed salmon have been resilient to price hikes.