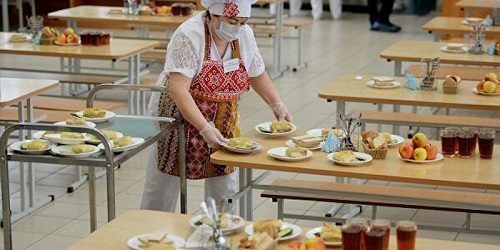 At a signing ceremony held during the V Global Fishery Forum in late September 2022, FSA President Alexey Osintsev said that the two parties will cooperate to provide Russian schools with value-added seafood products – primarily pollock fillets and mince. He said the potential yearly demand for fillet and mince from schools is 30,000 metric tons, or 25 percent of the national annual production volume of deeply processed pollock products. Schools currently make up 80 percent of Russia’s food-buying program.

According to the FSA, the move is intended to help boost domestic fish consumption, a recent priority of both the industry and the federal government. In response to that push, IUSSN Director Vladimir Chernigov said the IUSSN wants fisheries to establish closer cooperation with providers of food for social establishments, including schools.

“Only then will we be able to offer the products that taste good to students and consistent with very strict requirements that apply to food for kids,” he said.

In a study of nutrition programs at Russian schools, the FSA found that 15 percent of the seafood consumed by students is imported – hake from Vietnam and Ecuador, pangasius from Argentina and China, mackerel from Latvia and Ecuador, and pollock mince and fillet from China. Additionally, despite the availability of quality fillet and minced pollock, schools tend to buy frozen fish.

The study found a significant portion of the products could be substituted by Russian-made products, and that recent processing efforts by Russian manufacturers has increased the output of processed products. While deeply-processed products accounted for only 17 percent of the country’s total seafood output in 2017, that total rose to 29 percent in 2021, and is set to increase to 65 percent through 2030 if current trajectories hold.

The FSA said seafood should be included in students’ weekly diets through amendments to federal and regional regulations. Additionally, it called for school buying programs to be amended to promote healthier dishes, such as seafood, and shift schools’ focus from frozen fish to semi-finished products that are more convenient to cook. The FSA also called for updated recipes to be developed specifically for school-aged children, as the study showed fish trailing behind meat in popularity.

“Parents and children turn down fish dishes at schools as formulations are outdated. We don’t have a unified fish-promotion program,” Chernigov said. “We have not yet chosen the right approach to get the youth acquainted with seafood, though it’s unique in terms of nutritional benefits.”
PREVIOUS：North American grocery chains lower prices to beat inflation NEXT：MSC's newest standard sets sustainability bar higher for tuna fisheries